Celebrated by more than 20 percent of the world’s population, Lunar New Year, which will be on Feb. 5 this year, is the most important holiday in China. Unlike western New Year that follows the sun around the earth, Lunar New Year is based on the Chinese lunar calendar and follows the moon. The tradition is celebrated with special meals, art, entertainment and fireworks.

Stoneridge Creek resident Kate Gong created this event five years ago with the desire to share her culture with the entire senior living community she’s called home for the past five years. A wonderful aspect of this annual event is that it gives all residents the ability to learn about various cultures from one another.

“This Lunar New Year celebration gives residents and their families the opportunity to learn more about the Asian culture through traditional food, entertainment and even personal stories,” said Gong. “I started this event to heighten awareness of the culture while also bringing us all closer as a community.”

Stoneridge Creek understands the importance of residents sharing their culture and spirituality. Research shows there’s a link between this and better mental health, and it also helps people feel more connected with the world around them.

More than 400 residents, team members and families attended this year’s event, which featured an Imperial Fashion Show of the Royal Chinese Court. Fifteen models showcased traditional attire worn in the courts of emperors and empresses. And, of course, it wouldn’t be Lunar New Year without the energetic and athletic Vovinam Viet Martial Arts group, who performed the popular lion dance. 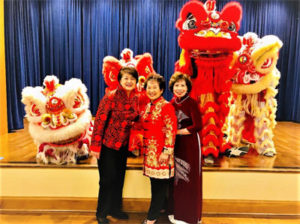