Residents of Stoneridge Creek showcased their war memorabilia on Veterans Day. The memories included medals received during the Vietnam War and the uniforms they wore on their backs.

Stoneridge Creek is home to 90 World War II, Korean War, Cold War and Vietnam War veterans. Captain Robert Steuben is one of the veterans who displayed his Vietnam War memorabilia on Veterans Day. Robert served in the Navy during the Vietnam War. In 1991, he received the Defense Meritorious Service Medal from the president for his service, which is one of the highest decorations one can receive in the military.

“After 30 years in the military, I retired as captain,” said Robert. “But through those years I wore many hats, teaching me that a job title doesn’t represent who you are. It’s how you treat others and how you interpret leadership.”

Every tear and patch on these soldiers’ uniforms were on display during Veterans Day at Stoneridge Creek. Residents got to tell their stories and hear the stories of others.

Susan Filice, Stoneridge Creek’s enrichment director, came up with the idea to put the memorabilia on display earlier this year. Nearly a dozen residents participated in the display.

“Stoneridge Creek doesn’t need a holiday to honor those who served,” said Filice. “We try our best to thank our veterans daily. This collection is a great way for all of us to see these memories in person.”

Another veteran, Thomas Horton, was in law school when he decided to join the Army in 1965. Six months later, he was in Vietnam where he stayed for 13 months.

“I joined the Army Security Agency and worked in the communications field while in Vietnam,” said Thomas. “While I didn’t fight in combat, I dealt with high-level information and even obtained a top-secret crypto clearance.” 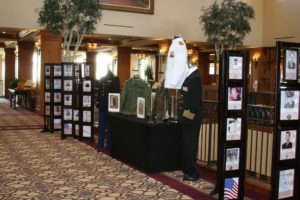